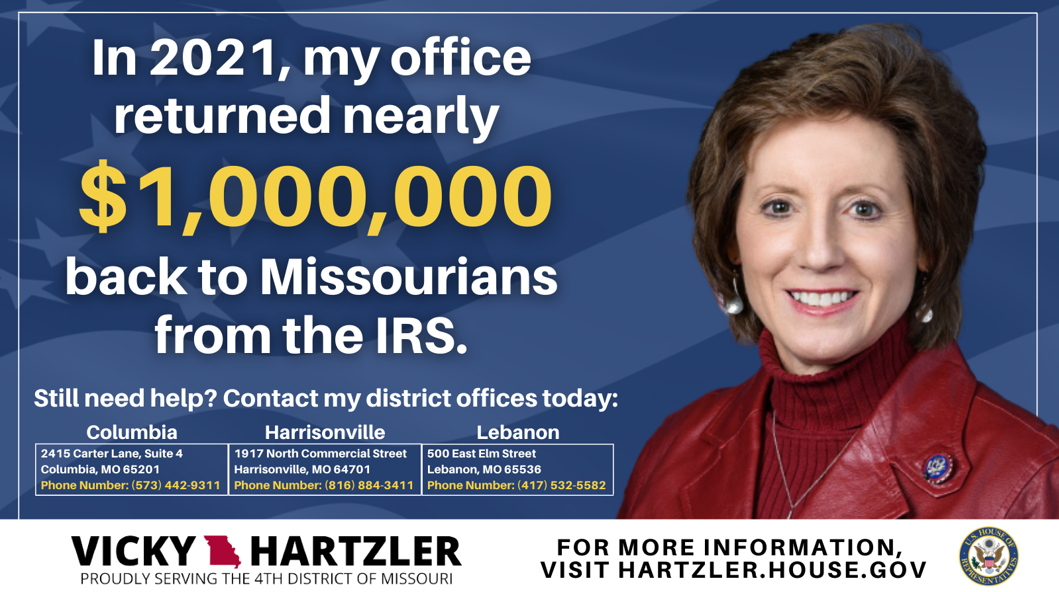 My offices are always open and happy to assist constituents of Missouri’s Fourth Congressional District. I am so proud to report that through these efforts, we returned nearly $1 million back to Missourians from the IRS in 2021. This is great work and a phenomenal service!

If you need assistance with the IRS, please contact my district offices below:

As always, thank you for entrusting me with representing your interests and values in Congress. Please see below for more stories from this week. 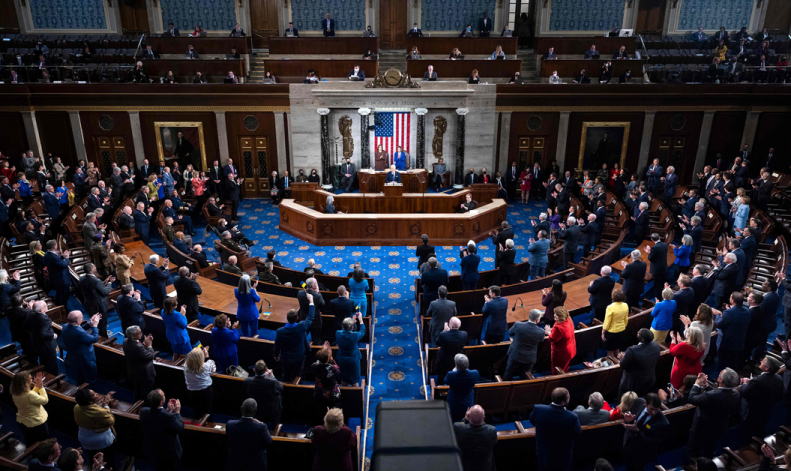 On Tuesday evening, I was in the House chamber for the State of Union address — hopeful that President Biden would announce a plan to reverse course from the disastrous year of failed leadership and return our country to the promise and prosperity of an America First agenda.

Instead, what I heard was a clear distortion of reality.

Let’s outline the facts: In just one year under his administration, our nation saw crisis after crisis riddled with inept leadership and incompetence.

Americans experienced record inflation, empty shelves, and increased energy costs throughout the past year. Our border became wide open while our Capitol became surrounded by a wall. Our children were forced to wear masks and taught they were inherently racist while parents were labeled terrorists by the Justice Department. Our communities were targeted by rampant violent crime and fentanyl while Democrats vowed to Defund the Police. Biden’s woke allies pushed for mail-order abortions and advocated for men participating in women’s sports. This administration forced an unconstitutional vaccine mandate on American workers while turning a blind eye to investigating China’s involvement in the COVID-19 outbreak. And Biden botched the Afghanistan withdrawal which killed 13 service members – including one from Missouri.

As President Biden attempts to distract from this disgraceful record, it’s clear we are not better off under Democrats’ governance.

With heightened tensions surrounding energy independence and Russia, Biden must change course, lead our nation, and fulfill the oath he took just a year ago. Now is the time to embrace energy independence again, rebuild the wall, curb runaway spending and inflation, protect life, and be strong on the world stage. “Peace through strength” should be our mantra, not “instability through weakness.” 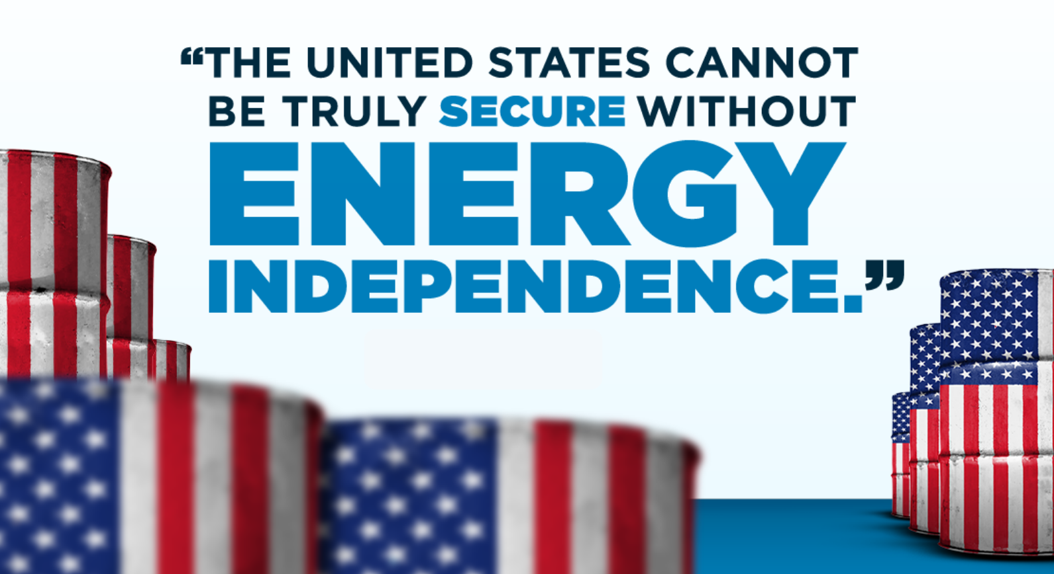 President Biden’s failed energy policies caused the United States to purchase 245 million barrels of Russian oil last year – a 24 percent increase from 2020 at a cost of $22 billion! This money is fueling Russia’s war on Ukraine.

That is unacceptable considering the plethora of available resources right here in the USA.

America should be becoming more energy independent – not dependent.

So where do we begin?

America must become energy independent once again, wean the European Union off of Russia, and sanction Putin’s energy sector to oblivion. That’s why I’ve co-sponsored legislation to do just that.

Given last week’s events, the world cannot wait another second. 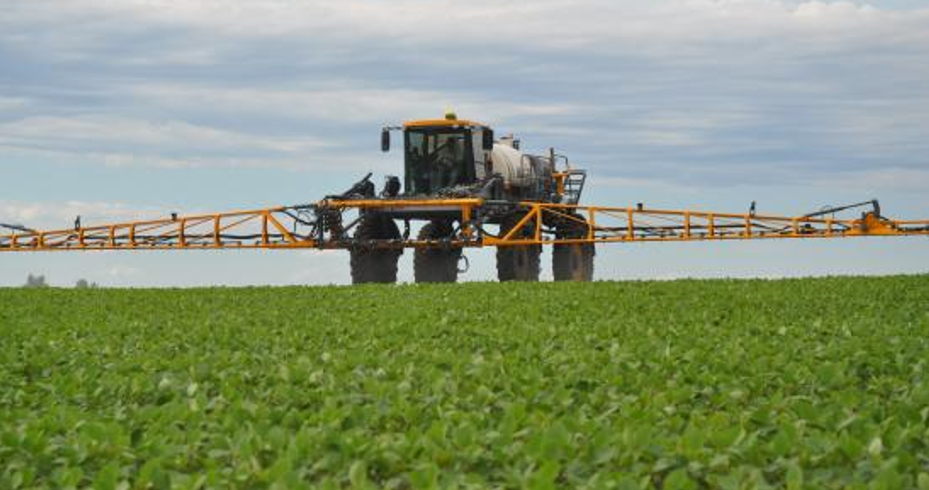 This week, I led a bipartisan effort in the House to stand up for our farmers dealing with excessive government regulations in the herbicide realm.

On January 11, the Environmental Protection Agency (EPA) announced the renewal of both Enlist One and Enlist Duo for seven-year registrations. At the same time, the EPA announced a new policy for evaluating and registering new active ingredients (AIs) through the Endangered Species Act (ESA), starting with Enlist One and Enlist Duo. As a result of this new policy that requires additional mitigation measures as a condition for the registration, producers in over 200 U.S. counties who have been using Enlist products for years are now prohibited from using these critical crop protection tools.

Missouri has five counties which are impacted by these regulations: Cedar, St. Clair, Bates, Vernon, and Barton. In response, we asked the EPA to do three critical things:

These three steps are much needed actions that the EPA can take to assist Missouri’s farmers. I am proud to be a strong voice for our agriculture leaders in Congress. 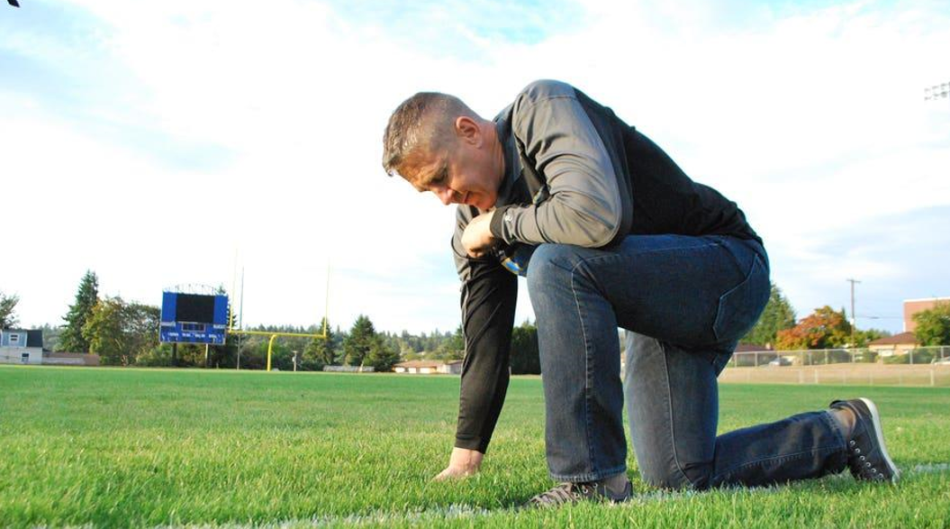 America’s God-given rights of freedom of religion and speech are central to our nation’s founding and have guided the United States for centuries. Today, these principles are being challenged and stand at risk of being diminished. That’s why I’ve partnered with Oklahoma Senator James Lankford to lead 53 of my Republican colleagues filing a brief at the Supreme Court in support of Coach Joe Kennedy in Kennedy v. Bremerton School District.

Kennedy was head coach for the Bremerton High School junior varsity football team and an assistant coach for the varsity team. For seven years after each game, he waited until the players cleared the field, then took a knee and silently prayed. Bremerton High School sent Kennedy a letter demanding he stop praying after games. Coach Kennedy’s contract with Bremerton School District was not renewed, resulting in his termination.

Kennedy filed a lawsuit against Bremerton School District, which a federal district court dismissed. On appeal, his case has made its way to the Supreme Court. I’m thankful they are hearing the case and am proud to help lead efforts to defend Coach Kennedy’s basic rights and all of our religious freedom rights.

It’s clear: Coach Kennedy exercised his right to practice his faith yet ended up losing his career and livelihood as a result. I urge the Supreme Court to right this wrong for the sake of America’s precious freedoms.